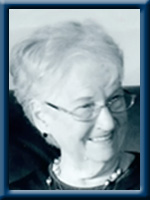 She was a daughter of the late Douglas and Ruth (Freeman) Teal.

Dorothy was born in Port Joli, Queens County and moved to Milton, Queens County at an early age, where she spent her youth. Her hobbies were baking and entertaining as she always had a “pot” on just in case of company arriving. Her family was her pride and joy  and as she always said “I love looking after my children”. Dorothy was a member of the Order of the Eastern Star  and was a past Matron of Queens Chapter #34, Liverpool.

Visitation will be held Tuesday, July 20th, from 7-9 p.m., with an Order of the Eastern Star Service at 7:00 p.m., both from Chandlers’ Funeral home, Liverpool. A Funeral will be held Wednesday, July 21st, 2010, at 3:00 p.m., from the Milton Christian Church. Reverend Jennifer Garbin officiating. Burial will be in Zion United Church Cemetery, College Street, Liverpool. Family flowers only. Donations may be made to the Nova Scotia Heart and Stroke Foundation. Online condolences may be made to the family at https://www.chandlersfuneral.com

Offer Condolence for the family of Hatt; Dorothy Bernice