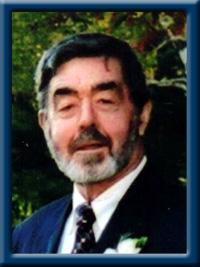 Robert Churchill Hartlen, 87, passed peacefully on Feb 15, 2021. His mind was strong but his body could go on no more. Robert known as “just Bob” was born in Milton, Queens County, N.S., the eldest of nine children to Ethel (Tarr) and Reginald Hartlen. Bob is survived by his sister Helen (Basil) Hanley and brothers Paul (Marg) Hartlen and Reg (Debbie) Hartlen. Bob was predeceased by his sister Alice and brothers Ronald, Douglas and Keith.
Bob grew up in Mersey Point, Queens County where he spent his early years tending to the family garden and the livestock. He often went to do chores for Grampa Tarr on his beloved bicycle and supported the community by lending a hand wherever he could. Bob developed his passions very young for hunting, fishing and the outdoors (a lot that he gained from his Scout leader Clarence Oickle) and carried them throughout his life. As a kid, Bob was often at the local fishing wharf seeing what the fishermen had landed that day and he could take home for supper.
In his younger days, he loved to travel to the local halls and listen to Hank Snow and friends play music. He continued to take in live local music shows whenever he could into his eighties, ideally at a bean supper. He played the guitar (a treasured Gibson in his later years) and sang with his friends and family whenever he could. Among his favourite artists were Merle Haggard, Chet Atkins and Rose Cousins.
Bob worked for a season on a farm but the wanderlust and lack of pay got the better of him. Bob found an opportunity to sail on one of the ships leaving Liverpool Harbour as a steward. Bob loved working on the ships and found his way to work as a deckhand sailing on the Great Lakes. Before long he landed a job with Imperial Oil where he worked for over 30 years. He started on deck but really “flourished” when given the opportunity to work in the ship’s engine room. Bob took great pride in keeping the ships engines running in top shape. He had lots of memories working in the engine room with great ship mates who became lifelong friends. Bob studied and progressed his Marine Engineering career while travelling to many foreign ports around the world with Imperial Oil and was pleased to be on the ship that brought the first oil from the Arctic.
Bob married Alice (Andrews) in Liverpool and they worked together to design and build their dream home at Molega Lake for their growing family, daughter Gayle and son Douglas. Bob and Alice loved to cook, entertain, and gather with friends and family at “The Lake”. Bob’s family moved to Shelburne, then Dartmouth so Alice could follow her career but “The Lake” remained a place of great pride and joy for Bob, no matter where he lived.
In 1985, Bob and family were devastated when their beloved Alice passed away from cancer at 46 years of age. Bob continued working but soon retired and moved to “The Lake” fulltime to help care for his parents, who lived around the cove on Molega Lake. Bob connected with son Ricky and daughter Vicki (Larry) Veinot and family in his later years.
Bob spent his time at “The Lake” with close friends and family following his passions: Cooking shows on PBS, live music (especially bluegrass), spoiling his Ford trucks and tending his wood furnace so he would know the weather outside. Bob’s love of learning showed in his knowledge of firearms as he loved to pour over the details of his gun and ammunition books.
Many hours were spent with brother Reg and friends Chris and Wilfred ‘discussing’ the best way to plant their gardens and which recipes they should be using after harvest. Bob loved when nephew Craig and niece Cindy would stop by for a visit with their families. Throughout Bob’s life he was an avid CBC listener from Peter Gzowski to Jeff Douglas and always had a good radio on the ship by his bunk. If you weren’t up to date with CBC Radio then you didn’t have your priorities straight.
The last year of his life, Bob lived with his son Doug, wife Alison, daughter Grace and dog Rozie in Dartmouth. With his daughter Gayle Smith, her husband Corey, and children, Ellen and Emmet nearby they all gave him the best care they could. Everyone, including the nursing staff, were quizzed regularly on what had been on CBC Radio that day. While the family cared for him, they were still expected to be learning from CBC as well.
Bob left a large footprint wherever he went and all the wonderful nurses that cared for him in the past year loved his stories and sayings. We will surely miss him and his stories but will cherish the memories he gave us all.
In his memory, Bob would have appreciated a home cooked meal shared with your friends and family. A private burial was held at Trinity Anglican Cemetery in Liverpool, NS. Any donations can be made to the award created in Alice’s name at Dalhousie for community health in Dental Hygiene, Alice Hartlen Memorial Prize; http://giving.dal.ca/hartlen

Offer Condolence for the family of Hartlen; Robert Churchill