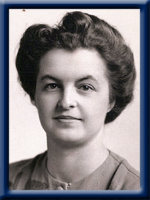 Born June 1, 1918 in Harmony, Queens County a daughter to the late Lauchlin and Mildred (Weir) Freeman, she spent her youth in Caledonia. After high school, she completed her teacher training at Normal College in Truro and had a teaching career for twenty-five years in elementary schools in South Williamston, South Milford, East Berlin and Brooklyn.

She met and married Clair Hartlen and they made their home for over 40 years in Brooklyn. After Clair’s retirement, they moved to their summer place at Sandy Bottom Lake in Annapolis County. They had 18 wonderful years travelling to Florida in the winters and living at the lake in the summers. They made friends for life in all three places and had a network of close family and acquaintances that they loved to travel with and entertain.

During her years in Brooklyn, she was an active member of the Pilgrim UCW. She loved playing bridge and was part of an active couples group which met on Saturday nights. They met at each other’s homes where they played a cut-throat game of bridge and then ate mounds of delicious food. These were very happy times for her as there was much fun and laughter. She was one of the two surviving members of that beloved group.

Pauline was noted for her kind deeds as well as her deep concern for other people’s struggles and she would often brighten your day with her delicious apple pie, her biscuits or her lobster chowder. During her life-time she opened her home and cared for her mother-in law, Sophie Hartlen and later had an apartment built on her home for her father, Lockie Freeman where she cared for him in his aging years.

As a teacher, she loved children, and her own grandchildren brought her much love and joy. She was fiercely proud of them all.

She was pre-deceased by her husband Clair and her brothers Laurie and Garth Freeman.

A celebration of Pauline’s life will be held on Monday, July 7, 2014 at 11:00 a.m. at Pilgrim United Church, Brooklyn, conducted by Rev. Vivian Moores. Family flowers only. Reception to follow in the church vestry. Her ashes will be interred in Seaside Cemetery, Brooklyn as she requested. Donations in her memory may be made to Pilgrim United Church, Brooklyn or Queens Manor. Online condolences to the family may be made at www.chandlersfuneral.com.

Offer Condolence for the family of Hartlen; Pauline Elfreda