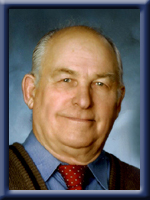 Born in Richards Landing, Ontario, he was a son of the late Godfrey and Annabelle (Cain) Harten.

Emerson enlisted in the Royal Canadian Navy in 1954, where he served his country for the next ten years. He then worked in construction for the next couple of years before going to work at the Halifax Shipyards during the boom years in the early 1970’s. Emerson then moved on to work with the Department of Defense where he worked the next 17 years until his retirement in January of 1993. He was a member of the Kempt United Baptist Church. Emerson had numerous hobbies such as woodworking, metal fabrication, computers, reading and genealogy.  He loved anything to do that might have a challenge to it as he was very handy at just about anything.

He was predeceased by a brother Keith.

Visitation will be held Monday, January 3rd, 2011, from 7-9 p.m., and a Funeral Service will be held Tuesday, January 4th, 2011, at 2:00 p.m., both from the Kempt United Baptist Church. Reverend John Boddy officiating. Burial will be in Pine Grove Cemetery, Kempt. Family flowers only. Donations may be made to Nova Scotia Heart and Stroke Foundation. Online condolences may be made at www.chandlersfuneral.com

Offer Condolence for the family of Harten; Emerson Godfrey