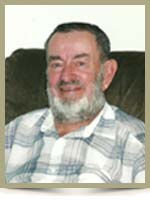 Born in Milton, he was a son of the late Perkins and Amy (Whynot) Harding.

Jim was a Veteran of WWII, serving as a dispatch rider. He was very active in the community, serving many years as a Scout Master and 4H Leader. Jim also took a leadership role in conservation and wildlife husbandry, promoting woodland skills to all who were interested, trailcraft, fly tying, animal calling and generally helping people to enjoy and understand the great outdoors. He worked for the Department of Fisheries and the Bowater Mersey Paper Company.

Above all Jim enjoyed a good sense of humour.

He was predeceased by his loving wife of  50 years, Fran; sisters Mary Hamway, Flora Colmer; brothers William and Harold.

Visitation will be held from 7-9 p.m., on Thursday, February 28, 2013 from Chandlers’ Funeral Home, Liverpool. A Celebration of Jim’s life will be held on Friday, March 1st, 2013, at 10:00 a.m., followed by a reception, all from the Milton Christian Church. Reverends Joe and Pat Roberts officiating. Family flowers only. In lieu of flowers donations may be made to the Milton Christian Church, Disciples of Christ or to the Queens Manor. Online condolences may be made to the family at www.chandlersfuneral.com

Offer Condolence for the family of Harding; James “Jim” Stewart