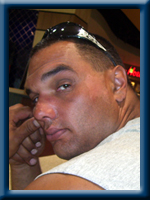 Born in Liverpool, he was a son of the late David “Sonny” and Joan (Roy) Hanson.

Darin worked hard to provide for his family and was well-known for his outgoing, warm, joyful laugh as well as his willing and helpful personality. He loved hunting, fishing and spending time with his family and friends.

He is survived by his wife and partner of 11 years Amanda (Conrad), his daughter Kelsey, his sons Jonathan and Darian, all at home. His sisters Crystal (Randy) Wamboldt and Tanya (Chad) Whynot, both of Liverpool. His brother Danny of Milton. His parents-in-law Allen (Debbie) Conrad of West Berlin, sisters-in-law Tracy (Arron) Carrier of Liverpool, Carrie (Tom) Hutchison of Florida, many nieces and nephews and cousins. His extended family Robert (Joley) Laing of Lower Sackville, Stephen (Amy) Rasley of Liverpool and his church family of the Salvation Army.

He was predeceased by his brother David.
Cremation has taken place under the direction of Chandlers’ Funeral Home, Liverpool where funeral service will be held Saturday, March 8, 2014 at 2:00 p.m., Lieutenant Larry Campbell officiating, assisted by Lieutenant Rose Campbell. No flowers by request, donations may be made to the Salvation Army, Liverpool, the Canadian Cancer Society or the Canadian Diabetes Association. Online condolences may be made to www.chandlersfuneral.com

Offer Condolence for the family of Hanson; Stephen Darin