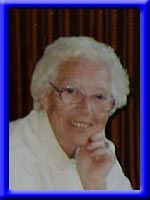 Born in Nuneaton, Warwickshire,  England, she was a daughter of the late George and Beatrice Allen.

Billie served in the Royal Air Force during World War Two in Air Traffic Control. After the war, she emigrated to Canada with her husband, John Hanson, an RCAF pilot and her baby daughter. She worked at the University of New Brunswick as a Bindery Supervisor for many years and retired to Nova Scotia’s South Shore in 1980.

Billie is survived by her daughter Shirley Rose of Calgary, AB. Her grand daughters Cheryl Cruikshank of Holland Landing, ON. Cassandra and Tamara Rose of Calgary. Her grandsons David McMinniman of Calgary and Douglas McMinniman of Kelowna, BC , five great grandchildren, several nieces and nephews and her dear friends Smith and Ellis Anthony of Liverpool.

She was predeceased by her husband John on January 26th, 1994 and her daughter Sandra Cruikshank on January 25th, 2009.

Cremation has taken place under the direction of Chandlers’ Funeral Home, Liverpool, NS. No flowers by requestOnline condolences may be made to www.chandlersfuneral.com.

Offer Condolence for the family of Hanson, Sheila