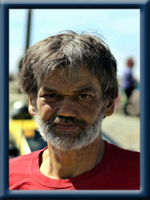 Hanson; Carl Daniel “Danny”, 52 of Milton, passed away on Friday May 25, 2018, in Queens General Hospital, Liverpool, surrounded by his loving family

Born in Liverpool he was the son of the late Earl “Sonny” and Joan (Roy) Hanson.

Bunga was a “jack of all trades” and had mastered several. He worked many years at Harry Freeman and Son Lumber Company, fishing lobster, and as a mechanic at Clyde Croft’s Auto salvage. Bunga was always mechanically inclined and could fix almost anything. He enjoyed hunting, fishing and anything to do with cars and racing them, he was also a member of the Greenfield Fire Department. He had a special place in his heart for his beloved cats and dogs. Above all else, he was most passionate about his family and spending time with them. He will be greatly missed by his loving family and close friends.

Visitation will be Monday, May 28th, 2018 from 7 until 9 p.m. and a Funeral Service will be held on Tuesday, May 29, 2018 at 11:00 a.m., both from Chandlers’ Funeral Home, Liverpool. Pastor Joanne Ozon officiating. Burial will be in Peaceful Hill Cemetery, Port Mouton. No flowers by request. Donations may be made to the family. To share memories or condolences, please visit www.chandlersfuneral.com

Offer Condolence for the family of Hanson; Carl Daniel “Bunga”