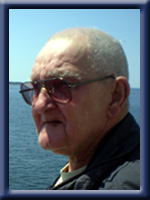 85, of Milton, Queens County, passed away peacefully in Queens General Hospital, Liverpool on Tuesday, July 5th, 2011 surrounded by his loving family.
Born in Milton, he was a son of the late Evelyn Grant and stepson of the late John Hatt.
William was a veteran of World War Two serving with the Merchant Marine. He also sailed with Mersey Paper Company aboard gypsum boats out of Hantsport. He worked for Mersey Seafoods for a time, as well as C. W. MacLeod’s as a labourer. William enjoyed his sailing time along with cooking, He especially enjoyed spending time with his family. He also held a special place in his heart for his pets and was an avid amateur radio operator. He was a member of Mersey Branch #38, Royal Canadian Legion, Liverpool.
He is survived by his daughters Doris Grant (Donald Keddy) of New Ross; Margaret (Roger) Leslie of Mill Village; Carolyn Tufts of Annapolis, Susan Whynot of Bridgewater. His sons: James (Tanya) at home and Wayne (Kim) of Brunei, Central Asia. 19 grandchildren and numerous great-grandchildren.
He was predeceased by his wife Ruth (Schrader), grandson Brian Roberts and son-in-law St. Clair Tufts.
Visitation will be Thursday, July 7th, 2011 from 7 until 9 p.m. with a legion service at 7:00 p.m. and funeral service will be Friday, July 8th, 2011 at 2:00 p.m. all in Chandlers’ Funeral Chapel, Liverpool. Chaplain Donald Lawton officiating. Burial will be at a later date. Family flowers only, donations may be made to Mersey Branch #38, Royal Canadian Legion, Liverpool.

Offer Condolence for the family of Grant; William Austin