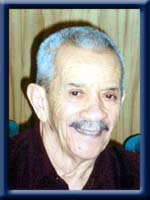 Born in Sandy Cove, Queens County, he was a son of the late  Percy and Gertrude (Young) Grant.

Maurice was a veteran of the Second World War serving with the West Nova Scotia Regiment, “West Novies”, as a rifleman in Europe and North Africa. Following the war, he was a truck driver for Long’s Transport then went to work with Bowater Mersey Paper Company. He retired as a foreman of the Groundwood department after 40 years. Maurice was an avid hunter, fisherman, woodworker and an all round “jack of all trades”.

He is survived  by his wife  Marion (Barriman), his daughter Holly Grant (Tom Chambers) of Brooklyn; his sons: David (Sandra) of West Berlin,  Leonard (Nancy)  and Brian (Candace Rhyno) both of Brooklyn. 8 grandchildren and 4 great- grandchildren. Stepdaughters Tanya Medynski of New Westminster, BC and Tracey Medynski of Halifax. His brother Lawrence (Betty) of Montreal.

He was predeceased by his first wife Marguerite Berriman, sisters Pearl Montley and Elizabeth and brothers Floyd, George “Arnie” and Thomas.

Visitation will be  Thursday, March 14th, 2013 from 7 until 9 p.m. and funeral service will be Friday, March 15th, 2013 at 2:00 p.m.  both from Chandlers’ Funeral Chapel, Liverpool. Lay Minister Peter Anthony officiating. Burial will be in Seaside Cemetery, Brooklyn. Family flowers only, donations may be made to the Canadian Cancer Society. Online condolences may be made to www.chandlersfuneral.com

Offer Condolence for the family of Grant; Maurice Percy