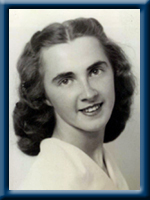 It is with profound regret that Pearl’s family announces her passing in Queens General Hospital, Liverpool, on April 13 after a brief illness.

Pearl was born in Chelsea, Lunenburg County, on July 23, 1929 to the late T. Raymond and Ella (Baker) Uhlman.

Pearl was one of a large family, this family being very near and dear to her, her entire life.  Pearl loved to recall and recount stories of growing up in such a large family.  When the family moved to Bridgewater in 1942, Pearl was able to continue her education and eventually complete high school.  She went on to take a commercial secretary course and found employment as a secretary and enjoyed that job very much, until moving to Brooklyn.  Pearl married Stephen (Tim) Golden in 1950 and they raised three children.  Pearl was a member of the Brooklyn Baptist Church, previously a member of Chelsea Baptist and Bridgewater Baptist.  Pearl’s second family was her Church and her faith.  Over the years the Brooklyn Baptist Church has been Mom’s home away from home and as she slowed down in her later years, one place she would strive to get out to was Church and church functions. She particularly loved to sing in the choir, bake for church socials, and serve as Sunday School teacher.  In later years, the rebirth of the church with young families coming out brought joy to her heart.

Pearl liked to knit, sew, cook, bake, read, play cribbage and spend the summer months at the cottage on Labelle Lake in Labelle, Queens County.  A recent trip to Greenfield and area to see the changes there left Mom in awe at how the quaint little village has grown.  She had so many questions as we drove around and had a smile on her face.  The strength and resilience of rural communities always impressed her.

As per Pearl’s wishes, her body has been cremated and we invite family, friends and acquaintances to celebrate her life with us at a visitation to be held Friday, April 18, 2014 from 7 until 9 p.m. and funeral service will be Saturday, April 19. 2014 at 11:00 a.m. both in Chandlers’ Funeral Chapel, Liverpool. Rev. Steven Hopper and Rev. Marie McCallum officiating.  A private interment will take place in Seaside cemetery, Brooklyn.   Family flowers only, donations in Pearl’s memory may be made to the Children’s Wish Foundation of Nova Scotia and/or the Canadian Cancer Society.  Online condolences may be made to www.chandlersfuneral.com

The family would like to thank Dr. Susan Thorne for her care and compassion over the years and the staff at Queens General Hospital, whose care and kindness will forever be in our memories.  As well, thank you to Pastor Steve and Pastor Marie for their kindness and support during our time of grief.

Offer Condolence for the family of Golden; Pearl Lorraine