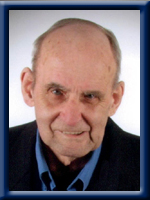 It is with great sadness that the family of Edward M. “Bub” Godfrey announces his passing peacefully at Queens Manor, Liverpool, on Saturday, November 20th, 2010.

Born in Brooklyn, he was a son of the late Arnold and Marion (Cole) Godfrey.

Bub worked for Bowater Mersey Paper Company for thirty seven years and went lobster fishing on his vacations. He always spoke fondly about his duck and rabbit hunting trips with his black lab, Lady. An excellent carpenter, family members were the grateful recipients of his many wood working projects. Married for over sixty years, Bub was devoted to his beloved wife Margie and his family. His grandchildren and great grandchildren were his pride and joy. Family gatherings were always the highlight of his life and his sense of humor and ability to bring a smile will be sorely missed.

He was predeceased by a granddaughter Ann; twin brothers Ronald in infancy and Reginald; son in law Greg Raymond.

Funeral service will be held Thursday, November 25th, 2010 at 2:00 p.m. from Chandlers’ Funeral Chapel, Liverpool. Lay Minister Peter Anthony officiating. No flowers by request, donations may be made to The Nova Scotia Heart and Stroke Foundation or to charity of choice. Online condolences may be made to www.chandlersfuneral.com

Offer Condolence for the family of Godfrey; Edward “Bub”