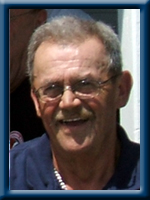 Godfrey, David Clinton, 67, of Brooklyn, Queens County, passed away on Wednesday, August 20th, 2014, in the Valley Regional Hospital.  Born in Brooklyn, he was a son of the late Arnold and Marion (Cole) Godfrey.  He was employed for 33 years at the Bowater Mersey Paper Plant. David loved his family, but was happiest when spending time with his loving granddaughters. He enjoyed playing cards at the Brooklyn Marina and having coffee with his friends. He was well known in the community for keeping a very well groomed lawn. He is survived by his loving wife of 46 years, Janet (Burnet); son, Adam (Denise), of Middle Sackville; daughter, Terri (Matthew) Robblee, of Valley; granddaughters, Emily and Rachel; brothers George (Georgie), of Amherstview, Ontario, Andrew (Lil), of Beach Meadows, John (Joanne), of Brooklyn; many nieces and nephews.  He was predeceased by a grandson, Jacob; brothers, Edward and Reginald.  Cremation has taken place under the direction of Chandlers’ Funeral Home, Liverpool. A Graveside Service will be held at a later date. No flowers by request. Donations may be made to The Lodge that Gives. Online condolences may be made to the family at www.chandlersfuneral.com

Offer Condolence for the family of Godfrey; David Clinton