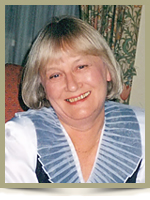 Joan Elizabeth Gilmour (nee Cant), of Milton, Nova Scotia passed away on Thursday December 30th 2010 at Queens General hospital with her daughter by her side, following a valiant battle with cancer.

Born in Evesham, in the County of Worcester in the United Kingdom, she was the daughter of the late John  and the late Kathleen (Thornton) Cant.

Joan emigrated to Canada in 1963, to pursue a job as a nanny. She married Bryan Gilmour in 1966 and was tragically widowed in 1977. Joan raised her two children on her own and enjoyed a successful career in sales and customer service with her last position being at Manheim Auto Auctions in Toronto. Joan was able to semi-retire in 2003 and fulfilled a dream of opening a bed and breakfast with her daughter. Joan was passionate about cooking, gardening and decorating and those pursuits combined with her warm hospitality ensured great success with many return visitors. Joan enjoyed spending time with friends and living life to the fullest with those she loved. She was able to enjoy a much anticipated final Christmas with family and friends in Ontario.

Joan is survived by and will be deeply missed by her two loving children Karen (Chris Currie) of Milton and Micheal (Kahney Long) of Toronto, her cherished grand daughter Grace Currie of Milton, sister Diana Sutcliffe, best friends Helen and Joe Devoy along with their children and families and many other friends in Ontario and family in Britain.

Cremation has taken place under the direction of Chandlers’ Funeral Home, Liverpool. A memorial service and reception will take place at the Gilmour / Currie residence at 348 Highway 8 in Milton at 2pm on Sunday, January 16, 2011.  Charitable donations can be made to the Canadian Cancer Society, the Menanoma Research Foundation or to Queens General Hospital. Online condolences at may be made to the family at www.chandlersfuneral.com

Offer Condolence for the family of Gilmour; Joan Elizabeth