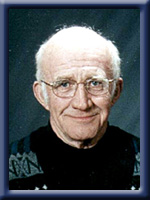 Stanley Wilson Giffin passed away peacefully at Queens General Hospital on November 13, 2011 after a short battle with cancer.
Stan was born in Sable River on October 6, 1933 to the late H. Stanley and Kathryn (Wilson) Giffin.
While in high school Stan enjoyed sports, including basketball and track & field.  As a young man he was a member of the Merchant Marines. He enjoyed singing with his father and uncles in their quartet. Stan enjoyed the outdoors and many weekends were spent with family and friends at Silvery Lake, “The River” and other camping areas. He worked many years in construction, and retired from Michelin Tires in 1990. He spent his retirement spoiling his grandchildren, doing yard work, travelling, and taking care of and enjoying his property on “The River”, lovingly referred to by some as Stan’s RV, for which he was the warden.
He is survived by his daughters Dawn Marie (Mark) Davies of Ottawa and June (Maurice) of Sable River, his sister Faye (John) Bower of Antigonish, his grandchildren Jeremy (Ashley) Martin of Halifax, Shawn Davies of Ottawa and Jared & Linden Martin of Sable River.
He is predeceased by his wife Shirley (Verge) and son Gary.
Visitation will be held Thursday, November 17th, 2011 from 10:00 until 11:00 a.m. followed by a funeral service at 11:00 a.m. both in Chandlers’ Funeral Chapel, Liverpool. Burial will be in Hillside Cemetery, Sable River. Family flowers only, donations may be made to the Canadian Cancer Society. Online condolences may be made to www.chandlersfuneral.com.

Offer Condolence for the family of Giffin; Stanley Wilson