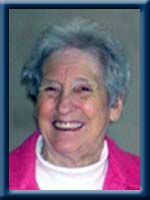 GIFFIN – Marjorie (Pierce), whose generous, kind and loving nature made her the heart and soul of her family, passed away peacefully on Wednesday, January 16th, 2013 in Maplestone Enhanced Care, Halifax.

Born June 5th, 1926 in West Sable River, she was a daughter of the late Claude and Lottie (Guest) Pierce.

Besides her parents, Marjorie was predeceased by her brothers Howard (lost at sea), and Gerald and her sister Verna and an infant sister, but her greatest loss was that of her oldest son Pierce followed by her youngest son Paul.

Funeral service will be Sunday, January 20th, 2013 at 1:00 p.m. from Chandlers’ Funeral Chapel, Liverpool.  Burial will be at a later date. No flowers by request, donations may be made to the Alzheimer’s Society of Nova Scotia or the Canadian Cancer Society. Online condolences may be made to www.chandlersfuneral.com

Offer Condolence for the family of Giffin; Marjorie (Pierce)