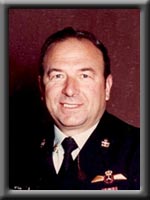 GETSON – William Clark “Bill”, 76 – Bill passed away peacefully at home, surrounded by his family on 16 May 2010. Born February 16, 1934 in Greenfield Queens Co. N.S. at his grandparents home Harvey and Lucy Getson. He was the oldest child of the late Wilfred and Muriel (Uhlman) Getson.

Bill was a flight engineer, who joined the Royal Canadian Air force in 1952. He loved to fly and spent over 18 000 hours in the air, traveling to many destinations around the world. Bill had accumulated 4800 on the Boxcar, 2300 on the Hercules, 10 000 on the Argus and 1000 on the Aurora Aircraft. He retired in 1984 as Chief Warrant Officer. He was a member and secretary of the Greenfield and District volunteer Fire Department for over 20 years. He was a member of the Greenfield Baptist Church, member and treasurer of the seniors club “Jolly Ponhookers”, belonged to the recreation committee and councilor of the Queens municipality for 10 years.

He so loved his life living at Annis lake that he made his cottage into his dream home. Bill is survived by his loving wife and best friend Della (Cowles). He was the devoted father of Mary-Ann, Debbie (George), Royce (Alice), Brent (Donna), Harvey (Donette). He will be missed by his loving grandchildren Cora-Leanne, Richard, James, Angela (Tyler), Amber, Travis and Keith and his great-grandson William. Sister Fern (Leaman), brothers Royce (Theresa), Edward (Jewell) plus his many other relatives and close friends.

He was predeceased by his former wife, Jacqueline (Smith) in 1963.
Bill’s remains have been donated to Dalhousie University for the advancement of Medical Research and Education, as his final act of generosity and concern for others, “in case the research could benefit someone else.” A celebration of life will be held at the Greenfield Recreation center on Saturday, 22 May, 2010 from 3:00 until 5:00 p.m. A private graveside service will be held at a later date at Pine Rest Cemetery. In lieu of flowers, donations in Bill’s memory may be made to Greenfield and District Fire Department, Pine Rest Cemetery Fund or the charity of your choice. Online condolences may be made at www.chandlersfuneral.com

Offer Condolence for the family of Getson; William C. “Bill”