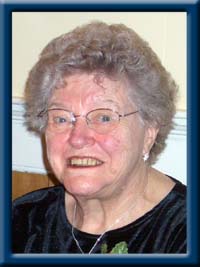 GERHARDT – Bertha C., 86, of Liverpool, passed away peacefully in Surf Lodge, Lockeport on Sunday, July 26, 2015.
Born in Cornwall, ON., she was a daughter of the late Albert and Lorna (Goudie) Doull.
Bertha worked as a nurse’s aide in Ontario prior to moving to Liverpool in 1962 where she worked at the former K&W Bookbinding Limited and Lanes’ Motel. She was a member of St. Gregory’s Catholic Church and an organist for over 45 years, a life member of the Ladies Auxiliary Mersey Branch #038, Royal Canadian Legion, Liverpool and was a former member of The Winds of Change Theatre Group. She enjoyed knitting, music, crossword puzzles.
She is survived by her daughters Anne (John) Chisholm of New Glasgow; Alta Mason of Liverpool; Susan (Garlent) Oickle of Port Medway; Eunice (Monty) Gale of Toronto; Christine Taillon of Kingston; a step daughter Sherri (Ted) Roy of Stellarton; her son Hugh (Shirley) Taillon of Smith’s Cove; three grandsons, a step granddaughter and a step grandson and several great grandchildren; sisters Dawn Levac of Cornwall, ON; Ellen (Eric) Johnstone of Etobicoke, ON.
She was predeceased by her husband Victor; sons George and Patrick Taillon and her son in law Joe Mason.
Cremation has taken place under the direction of Chandlers’ Funeral Home, Liverpool. Visitation will be Wednesday, July 29, 2015 from 7 until 9 p.m. in Chandlers’ Funeral Chapel and funeral service will be Thursday, July 30, 2015 at 2:00 p.m. in St. Gregory’s Catholic Church, Liverpool. Burial will be in Trinity Anglican Cemetery, Liverpool. No flowers by request, donations may be made to St. Gregory’s Catholic Church, the Canadian Cancer Society or to a charity of your choice. Online condolences may be made to www.chandlersfuneral.com

Offer Condolence for the family of Gerhardt; Bertha Catherine