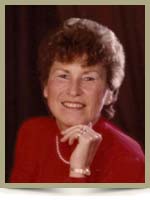 Born in Laconia, Lunenburg County, she was a daughter of the late Arnold Bertram and Ethel Mae (Veinot) Johnson. She was a faithful member of First United Baptist Church, New Glasgow. Arna had been employed as a seamstress for a number of years and with Peoples Jewellers for 11 years, retiring in 1992. She was Past Matron of Century Chapter No. 10, Order of the Eastern Star, New Glasgow and an affiliated member of Elm Chapter No. 48, OES, Upper Stewiacke.

Besides her parents, she was predeceased by her brother, Richard Johnson; brothers-in-law, Ross (Ruth) Gardner and Ted Emenau.

Family flowers only. Donations may be made in Arna’s memory to the Alzheimer Society of Nova Scotia.

Offer Condolence for the family of Gardner; Arna Virginia