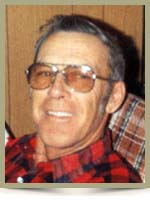 Born in St. Georges, P.E.I., he was a son of the late Rudolph and Janette (Delorey) Gallant.

Gerald worked for the Nova Scotia Power Commission for 36 years, retiring as a line foreman. He was an avid hunter and fisherman. In his younger years Gerald played softball with the Liverpool Lamplighters and he was also a former member of the Pictou Highlanders Reserve Army.

He was predeceased by sister Laurette; brothers Joseph and Charles.

A private family service was held in St. Gregory’s Catholic Cemetery, Liverpool. Father Brian Murphy officiated. Donations in Gerald’s memory may be made to the Queens General Hospital Foundation, the I.W.K. Children’s Hospital  or to the Queens County branch of the V.O.N.. Online condolences to the family may be made at www.chandlersfuneral.com

Offer Condolence for the family of Gallant; Gerald Raymond