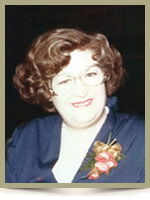 PLEASE NOTE: Due to the pending snowstorm forecast for Tuesday, January 27, the funeral service for Muriel will be this evening at 8:00 p.m. following visitation

Born in Longueuil, QC on September 25th, 1932, to Elsie (Hogan) and Oscar Siegl, Muriel was the third of four children.

She leaves behind to mourn her passing; a daughter, Sheree (Aubrey) Chandler, a son, Jim (Hanna) Gallant, grandchildren; Amanda and Jacob Chandler,  Benjamin, Samantha and Melanie Gallant;  her sisters, Hélène (Gérard, dec.2008) Labossière and Dorothy Siegl, both from Montreal, and many loving nieces, nephews and friends.

Muriel found her passion and learned to sew while working for Singers in Montreal. She began her varied retail career at Eatons and, being a true “people person,” it quickly became apparent that Muriel was a natural salesperson. When the family retired to PEI she became a well-known and very knowledgeable clerk in the Housewares section at Holman’s Department Store. Muriel’s last full time job combined her love of people and love of sewing as a clerk/seamstress at The Silver Bobbin. She also volunteered in the Prince County Hospital Gift Shop in Summerside for sixteen years.

Muriel’s youthful dreams of travelling to far away lands were realized when she married a military man. Both of her children were born overseas and Muriel saw the places she had imagined visiting as a girl. The most valuable treasures obtained during her travels, though, were the many deep and abiding, lifelong friendships she made over the years.

Family was everything to Muriel.  She lauded her children as her greatest accomplishments and gave much love to her grandchildren and to the many friends and family she held dear.  She will always be loved and sadly missed by all who knew her.

Visitation will be held from 7:00 – 8:00 p.m. and a celebration of Muriel’s life will be held at 8:00 p.m. on Monday, January 26th, 2015, following visitation both from Chandler’s Funeral Chapel, Liverpool. Interment will take place in PEI at a later date.

Offer Condolence for the family of Gallant; Muriel Ruth