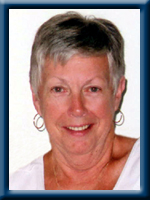 Born in Bangs Falls, Queens County, she was a daughter of the late George and Ella (Coombs) Fisher.

Dawn was a real estate broker for 25 years, co-owning and operating Gallant Agencies alongside her late husband Charlie. She was a member of St. Gregory’s Catholic Church as a well as a former member of the Kinette and K-ette Clubs of Liverpool.

She is survived by her daughter Heidi (Mark) Williams of Hebbs Cross, her son Mark of Calgary and her companion Harry Rennehan of Churchover.

She was predeceased by her husband Charles and infant sister Dorothy, an infant brother, her brother Cleveland and her adopted brother Sherman.

Visitation will be held Sunday, April 28th, 2013 from 7 until 9 p.m. and funeral service will be held Monday, April 29th, 2013 at 11:00 a.m. both in Chandlers’ Funeral Chapel, Liverpool. Father Keith Billard officiating. Burial will be in St. Gregory’s Catholic Cemetery, College Street, Liverpool. Family flowers only, donations may be made to the Canadian Cancer Society or the Victorian Order of Nurses, Queens County Branch.  Online condolences may be made to www.chandlersfuneral.com

Offer Condolence for the family of Gallant; Cynthia Dawn