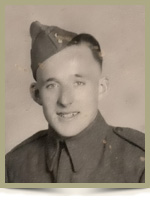 Born in Hunts Point, he was a son of the late William and Mary Ann (MacKay) Frellick.

Donald enlisted in the Army on January 25th, 1943, in Halifax. After basic training he took a wireless course and served in the Tank Corps. in Italy, Holland and Africa during WWII with the 4th Princess Louise Dragoon Guards and then the 8th New Brunswick Hussars. Donald worked many jobs over the years, spending the last 25 years of his working life as a fisherman. He was a member of the Royal Canadian Legion, Branch #38, Liverpool and the former Bayview Seniors Club.

He is survived by his loving wife of 60 years, the former Margaret “Peggy” Kempton; son Douglas (Carol), of Queensland; grandchildren Colleen and Jeffrey.

He was predeceased by a sister Hattie; brothers James, Alexander, Ronald and Gordon.

Cremation has taken place under the direction of Chandlers’ Funeral Home and Cremation Services, Liverpool. A Graveside Memorial Service and a Royal Canadian Legion Service will be held Friday, July 1st, 2011, at 11:00 a.m., both from St. James Anglican Cemetery, Hunts Point. Reverend Neil MacDonald officiating. Family flowers only. Donations may be made to St. James Anglican Cemetery. Online condolences may be made to the family at www.chandlersfuneral.com

Offer Condolence for the family of Frellick; Donald Mackay