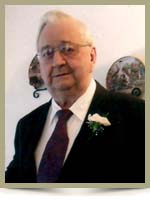 Born in Mersey Point he was a son of the late John and Gladys (Hartlen) Frelick.

Ed worked for the Bowater Mersey Paper Company, up until his retirement. He also owned and operated his own lobster fishing boat for many years. He enjoyed crossword puzzles and playing bingo.

He was predeceased by his first wife Gertrude; stepdaughter Barbara Anne; brother Arthur.

Cremation has taken place under the direction of Chandlers’ Funeral Home and Cremation Service, Liverpool. At Ed’s request there will be no Funeral Service. No Flowers by request. Donations may be made to the Dialysis Patient Fund. Online condolences may be made to the family at www.chandlersfuneral.com

Offer Condolence for the family of Frelick; Edwin Ross