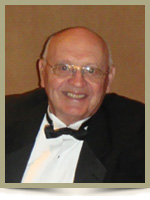 Born in Greenfield, he was the youngest son of the late Harry and Leda (Wile) Freeman.

He was retired from Shell Canada living and working in many communities throughout Nova Scotia and New Brunswick. An avid golfer, he belonged to the club in every community where he resided. He was currently an active member of the White Point Golf and Country Club in Liverpool and a past president. He was an active member of the Kinsmen Club and K-40 over the years and a life member of the Halifax Kinsmen Club and also the South Shore Senior Men’s Golf Association. He was a current member of the South Shore Regional Hospital Board, Jolly Ponoquers Seniors Club, a volunteer fireman and a senior deacon of the Greenfield United Baptist Church. Very active in community affairs in Greenfield and throughout Queens County, he served on the Queens County Planning Commission. He was instrumental in the process to construct the Greenfield Baptist Church and Recreation Center of which his son Deryck was the design architect. He enjoyed outdoor activities from an early age and was involved in baseball, bowling, hockey, curling, golf, hunting and fly fishing. Well known for his planked salmon parties, he was asked to be guest “chef” at many local functions. Young at heart, he enjoyed social activities, singing and being involved with his community.

He was predeceased by his first wife, Joyce (Strum); son Deryck, sister Roxie and brother Harry.

Offer Condolence for the family of Freeman, Walter Wile