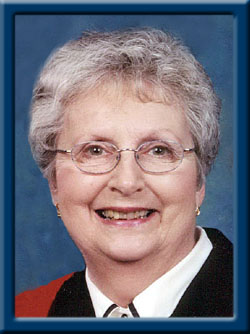 FREEMAN – Shirley Louise, 84, of Greenfield, Queens county, passed away peacefully in Fishermen’s Memorial Hospital, Lunenburg on March 24, 2016
Born in Lunenburg in 1932, Shirley was the treasured only child of the late St. Clair and Vera (Demone) Crouse.
She was a wonderful daughter, wife, mother, grandmother and great grandmother. She was a graduate of the Maritime Business College in Halifax at the age of eighteen. Multi-talented, she could turn her hand to anything she wished. She was a marvelous homemaker and family and friends enjoyed many, many delicious gatherings at her table. Mom was happiest when decorating her home for an occasion and cooking up a feast. She was an accomplished pianist, knitter, gardener, and seamstress. She loved reading, music of all kinds, tole painting and arranging her flowers. She was a willing volunteer in her community, participating for many years in the Greenfield Baptist Sewing Circle, Zion United Church Choir, K-40, and was past Commissioner for Girl Guides of Canada. Her biggest passion was her family and we are richer for her love and poorer for her passing from complications of Alzheimer’s Disease. The past years were challenging, but she met them with the courage and dignity she had always shown through life’s adversities. To the very end, we enjoyed her smile at a visit from her family and delighted laughter when visited by her great grandchildren.
She is survived by her son William (Heather) Wharton of Chester, NS; her daughter Elizabeth (James) Fraelic of Brooklyn, NS; her grandchildren Angela and Billy, Leanne and Scott and her great grandchildren Bailey, Nadia and Jack; her step son Allan Bolivar of Middlefield.
She was predeceased by her first husband Laurie Wharton; her second husband Freeman Bolivar and her third husband Walter Freeman; all much beloved and greatly mourned.
Cremation has taken place under the direction of Chandlers’ Funeral Home, Liverpool. At the family’s request, there will be no visitation. Funeral service will be from Chandlers’ Funeral Chapel on Wednesday, March 30, 2016 at 11:00 a.m. officiated by Reverend Carol Smith. Reception to follow in the funeral home. Burial will be at a later time. In lieu of flowers, donations in Shirley’s memory may be made to the Alzheimer’s Society of Canada. Online condolences may be made to www.chandlersfuneral.com
The family would like to express their gratitude for the loving care our mother received at Ridgewood Retirement Home, Bridgewater and to the staff of Queens General Hospital and especially the staff at the ALC Unit at Fishermen’s Memorial Hospital over the past several months. The care provided to her had been exemplary.

Offer Condolence for the family of Freeman; Shirley Louise