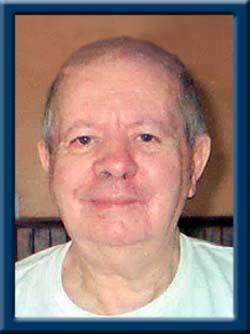 It is with great sadness that the family of Lawrence Russell Freeman, 76, announce his sudden passing on September 28, 2015 at Hillsview Acres, Middlefield.
Born in Mersey Point on August 22, 1939, he was a son of Dorothy (Hartlen) Freeman of Milton and the late Russell Freeman.
Lawrence was a auto repairman by trade and worked at different jobs. In his younger years, Lawrence was a happy family man. Lawrence loved music, fishing, bowling, bus trips and family birthday dinners. For many years, he lived at Hillsview Acres where the great staff looked after him and he loved them all.
Surviving besides his mother are, daughter Marleen (Richard) Fraser of Bridgewater; his son Thomas of Bridgewater; grandchildren Madison, MacKenzie and Morgan; his wife Marilyn (Whynot); his best friend Letha; his sisters Carol Wigglesworth and Marguerite (Dick) Cole, both of Milton; Jeannette Lewis of South Brookfield; Shirley Freeman of Bridgewater; Helen (Tim) McGee of Glen Haven; his brother Edward of Bramalea, ON.
Cremation has taken place under the direction of Chandlers’ Funeral Home, Liverpool. A private graveside memorial service will be held at a later date in Milton Community Cemetery. Family flowers only, donations may be made to Hillsview Acres, Middlefield, or to a charity of your choice. Online condolences may be made to www.chandlersfuneral.com

Offer Condolence for the family of Freeman; Lawrence Russell