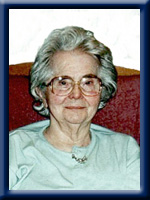 Born in Liverpool, she was a daughter of the late Duncan and Salome (Nickerson) Conrad.

Hazel loved her family and was well loved by them in return. She enjoyed traveling, playing cards and she was very good at anything crafty such as crocheting, embroidering and sewing. She was a member of the Liverpool Senior Citizens Friendship Club.

She was predeceased by her husband William; a daughter in infancy; foster parents George and Cora Wentzell.

Visitation will be held Saturday, August 7th, 2010, from 1-3 p.m., followed by a Funeral Service at 3:00 p.m., both from Chandlers’ Funeral Home, Liverpool. Fred Campbell officiating. Burial will be in Hillside Cemetery,  Sable River. Family flowers only. Donations may be made to a charity of your choice. Online condolences may be made at www.chandlersfuneral.com

Offer Condolence for the family of Freeman, Hazel C.