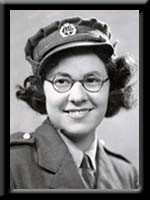 Born in Middlesex, England, she was a daughter of the late Charles and Nora (Turner) Harvey.

Betty served with the Royal Army Corps during the Second World War. She was an avid reader and loved listening to classical music.

She is survived by her son Roger of Windsor, her son-in-law Richard Smith of Liverpool. Her grandchildren Allan (Ann) Smith and Kevin Smith, Mark (Holly) Freeman and Margo (Rob) Frost. Her great-grandchildren Staci and Sonia Smith, Nixon Freeman, Lilly and Malcolm Frost.

She was predeceased by her husband F. Terrance, her daughter Joan Smith and her sister Elsie.

There will be no visitation at Betty’s request. A graveside funeral service will be held Monday, April 1st, 2013 at 11:00 a.m. in St. James Anglican Church Cemetery, Hunt’s Point. Chaplain Donald Lawton officiating. No flowers by request. Donations may be made to any charity. Online condolences may be made to www.chandlersfuneral.com

Offer Condolence for the family of Freeman; Betty Joan