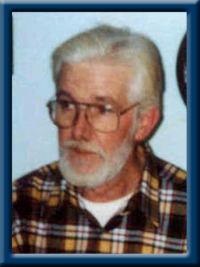 Al was born to the late Thomas Luke and Isabella (Hepple) Frazer on December 24, 1942 in Upleadon, Gloucestershire, England.  He was the  youngest of four children.

Al is survived by his loving wife, Gloria (Rideout) of Liverpool; son, Tim (Ruby Flemming) of Pleasantville and many loving nieces and nephews.

A number of years after the death of his father and at the age of 13, Al and his mother Isabella, immigrated to Nova Scotia.  He loved his new life and revelled in the sense of space that Canada gave him. When he was old enough he joined the Royal Canadian Navy.  After he left the Navy he and his wife settled in New Glasgow where he became a prominent commercial artist specializing in freehand, sign painting.  For many years, his work was featured all over Pictou County.

Al was a long time member of the New Glasgow Legion Branch 34.  He was also a past member of the Kinsman Club and the Abercrombie Volunteer Fire Department.

Al loved the great outdoors, and loved spending in the woods hunting, fishing and learning the art of fly tying.  For a number of years he operated the Silver Springs Trout Farm in Little Harbour.  He was always happiest when he was outdoors.  One of his special joys in life was sponsoring and teaching children’s fishing at his trout farm and helping the young ones experience the joy of catching a fish for the first time.

Family was always important to Al and in his retirement he worked with his nephew Whit at the Strickland Salmon Hatchery in Little Harbour, Pictou County.

In the last year and a half of his life, Al lived at Queen’s Manor in Liverpool where he received exceptional care.  The family wish to express their gratitude and appreciation to all the staff and volunteers at Queen’s Manor and thank them for the love and support they gave Al, especially during the COVID-19 lockdown.

Cremation has taken place under the direction of Chandler’s Funeral and Cremation Service, Liverpool.  A private graveside servive will take place at a later time in Little Harbour, Pictou County. Donations in Al’s memory can be made to Queen’s Manor, Liverpool or the Royal Canadian Legion. To share memories or condolences, please visit www.chandlersfuneral.com

Offer Condolence for the family of Frazer; James Alan “Al”