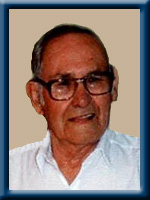 Joe was a long time resident of Milton and employee of Bowater Mersey Paper Company until his retirement in 1976. He was a veteran of World War II serving with the West Nova Scotia Regiment from 1939 -1945. Joe was an avid salmon fisherman and spent many hours fishing with his sons on the Miramichi and Tobique Rivers.

He was predeceased by his wife Geraldine C. (Glode), his son Max, granddaughters Connie Chase and Lisa Parent. Sisters Grace Wentzell and Evangeline Pictou and brothers John and Peter.

Visitation will be Tuesday, August 10th, 2010 from 2 until 4 p.m. and 7 until 9 p.m. in Chandlers’ Funeral Home, Liverpool. Funeral Mass will be Wednesday, August 11th, 2010 at 11:00 a.m. from St. Gregory’s Catholic Church, Liverpool, Father Joseph Christensen officiating. Burial will be in St. Gregory’s Catholic Cemetery, College Street. Family flowers only, donations may be made to any charity. Online condolences may be made to www.chandlersfuneral.com.

Offer Condolence for the family of Francis; Stephen Joseph “Joe”