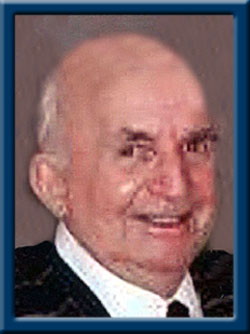 Joseph Lewis Fralic, of Brooklyn, Queens Co. passed away peacefully in Queens General Hospital, Liverpool on Sunday, September 11, 2016.
Born in Brooklyn, on October 11, 1923, Joe was the son of the late Joseph and Mary (Wall) Fraelic.
“Joesy” married Isabel Dexter on May 9, 1947 and they enjoyed 69 years of marriage and family life together. In the early years, Joesy became a millwright and began his career at Bowater Mersey Paper Company Limited. He enjoyed hunting and fishing with his friends. At age 55, he made the decision to leave his employment at Bowater to pursue full time fishing. In partnership with his sons, he built the family fishing and processing business, of which he was so very proud. He continued his passion for lobster fishing, actively fishing until the age of 75.
Joe had an engineering brain and the family benefitted from his great intelligence through the building of fishing vessels, homes and anything that needed fixing. He was forever reading and thinking and his knowledge was vast and amazing. He also gave service to the fishing industry through many advisory boards and councils over the years and was a well-respected voice of reason within government and industry.
He was well-known for his love of music and his beautiful singing voice. Many friends and family far and wide were blessed to enjoy his songs and he loved nothing better than an audience with which to share his music. Family gatherings were not complete until he sang.
Joesy also had the good fortune to live surrounded by family, with two of his three sons and their families living on either side of his own home. He adored his grandchildren and took pride in their successes and was enjoying the next generation of great grandchildren when they visited. He was interested in his whole family and shared a very close bond with all three of his sons. Conversations between father and sons were like listening to a combination of finance, engineering, fishing and anything mechanical. They could figure out how to invent and build anything. Family gatherings were filled with much love and laughter and were times treasured by all.
Joe was a member of Pilgrim United Church in Brooklyn and actively involved until the deterioration of his health in later years.
Joe is survived by his wife Isabel (Dexter), called “Issy” by everyone; his three sons and their wives – Joe and Gerri of Brooklyn, NS; Jim and Liz of Brooklyn, NS; Jerry and Dee of Spring, Texas. Grandchildren Joe (Petra) of Port Colbourne, ON; and their sons Joey, Eoin and Devon; Chris (Arushi) of Kanata, ON and their children Miles and Sneha; Leanne (Cory) Hanley of Lakelands, NS and their daughter Nadia; Scott (Vanessa) of Hamilton, ON and their son Jack. He is also survived by nieces Glady Long, Sharon Burns, Patti Peck and Jolene Jarvo.
He was predeceased, besides his parents, by his sister Catherine Reinhardt, brother-in-law Leon Reinhardt and niece Noreen Reinhardt.
Cremation has taken place under the direction of Chandlers’ Funeral Home, Liverpool. At Joe’s expressed wish, there will be no visitation and no funeral service. A private family committal will be held at a later date. In lieu of flowers, donations may be made to a charity of choice. Online condolences may be made to www.chandlersfuneral.com.
We will forever hear Dad say:
“I am still a lobster fisherman, I just don’t go anymore.”

Offer Condolence for the family of Fralic; Joseph Lewis