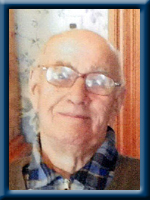 FRALIC – Clayton S., 89, of Port Mouton, Queens County, passed away peacefully in Queens General hospital, Liverpool on April 1, 2015.
Born in Beach Meadows, Queens County, he was a son of the late Harry and Elsie (Dexter) Fralic.
Clayton served with the Merchant Marine during the Second World War and worked with Mosher and Rawding for many years. He loved his walks and enjoyed talking with people and playing the harmonica.
He is survived by his sisters Hazel (Walter) Mouzar, Rosemary Decker and Edith (Robert) Parnell, all of Brooklyn, several nieces and nephews,brothers Aubrey (Carol Ann) of Brooklyn and Murray (Shirley) of Clarence, NS.
He was predeceased by his sisters Gloria Reinhardt, Beatrice Selig and Betty Matheson and brothers Douglas and Percy.
Cremation has taken place under the direction of Chandlers’ Funeral Home, Liverpool, NS. At Clayton’s request, there will be no funeral service. Donations may be made to Emmanuel United Church, Beach Meadows or to the Queens General Hospital Foundation. Online condolences may be made to www.chandlersfuneral.com. The family would like to thank Tim and Gloria and staff at Stonehaven Lodge in Port Mouton for being so kind to him during his two year stay as well as Dr. Woodford, Dr. Blackadar and nurses on second floor Queens General Hospital for giving him such nice care during his stay.

Offer Condolence for the family of Fralic; Clayton Stewart