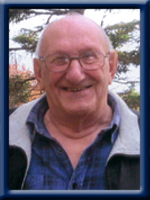 Cecil was the last surviving member of his immediate family. Born in Beach Meadows, on January 14th, 1930, he was a son of the late Andrew and Maude (Pye) Fralic.

In Cecil’s earlier years, he worked in the woods at the game sanctuary in Liscombe, Guysborough County. He then worked a short time at the Bowater Mersey Paper Plant as a stevedore, before going to sea. He served on the many Bowater Mersey Paper Ships, spending his last nine years on “The Vinland”. He then worked on the Tug Boat, “Sandy Lake”, as Mate Chief, for a short time before captaining the tug boat, “The Indian Lake”. Cecil also sailed on the Gypsum Boats, out of Hantsport. After retiring from the sea, he worked for over 25 years as an auto body mechanic at the Cornerbrook Garage Body Shop, until his retirement. He had many hobbies, some of his favorites were, listening to old western music, sitting around and strumming his guitar, going to variety shows, card parties, playing crib, and in his younger years he enjoyed camping, fishing, and traveling around the countryside. Cecil was a member of the Activity Seniors Club, Liverpool, and the Cornerbrook Echo Seniors Club.

Cremation has taken place under the direction of Chandlers’ Funeral Home, Liverpool. A Graveside Service will be held on Saturday, August 23rd, 2014, at 11:00 a.m., in the Beach Meadows Community Cemetery. Lay Minister Peter Anthony officiating. No flowers by request. Donations may be made to the Queens General Hospital Foundation or to a charity of your choice. Online condolences may be made to the family at www.chandlersfuneral.com

Offer Condolence for the family of Fralic, Cecil Frederick