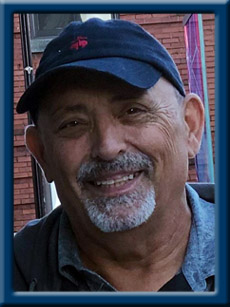 FRALIC – Brian F., 60, of Port Mouton, Queens County passed away peacefully in Queens General Hospital, Liverpool, on Friday, December 13, 2019.
Born in Wolfville, Brian was a son of Joseph and Audrey (Smith) Fralic of Port Mouton.
Brian was a former employee with Bowater Mersey Paper Company for 30 years. He was a “man of many trades”; carpenter, millwright, welder to name a few. At an early age, Brian had a love for cars especially sports cars which continued throughout his life. He enjoyed his scratch and lotto tickets and playing poker with the guys. He loved time with his family and becoming Papa to his grandchildren who were the light of his life.
He is survived by his wife of 38 years Barbara (Kempton); his daughter Jessica (Eric) MacKay of Musquodoboit Harbour; his son Nick, at home; his grandchildren Benjamin and Hanna MacKay; his brothers Michael (Glenda) of Beach Meadows and Glenn of Ottawa.
Cremation has taken place under the direction of Chandlers’ Funeral Home, Liverpool. A celebration of Brian’s life will be held on Wednesday, December 18, 2019 from 6 until 8 p.m. in Chandlers’ Funeral Chapel, Liverpool. A private graveside interment will take place at a later date. No flowers by request, donations may be made to the chemo unit at South Shore Regional Hospital, Bridgewater, NS. Online condolences may be made to www.chandlersfuneral.com

Offer Condolence for the family of Fralic; Brian Frank