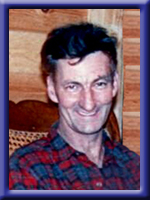 Born in Caledonia, he was a son of the late Keith and Ada (Boulter) Frail.

Lorenzo was  a well accomplished welder, having learned his trade in Montreal. He applied his craft throughout Eastern Canada while working in many places, such as  Wabush, Labrador. He also worked  for Trenton Car Works, in New Glasgow, Steel and Engines, in Liverpool, Freemans Lumber Mill, in Greenfield and for many others in his community when a job needed to be done. He was a member of the Westfield Baptist Church. He loved anything to do with the outdoors such as cutting wood, hunting and fishing. Lorenzo was a very well known Striped Bass Fisherman.

Cremation has taken place under the direction of Chandlers’ Funeral Home, Liverpool. Visitation will be held Monday, December 6th, 2010, from 6-8 p.m., from Chandlers Funeral Home. A Celebration of Lorenzo’s Life will be held Tuesday, December 7th, 2010, at 2:00 p.m., from Westfield Baptist Church. Burial will be in Hillcrest Cemetery, Westfield. Reverend Lloyd Gillieo officiating. Family flowers only. Donations may be made to the North Queens Fire Department or to the charity of your choice. Online condolences may be made at www.chandlersfuneral.com

Offer Condolence for the family of Frail; Lorenzo Edmund