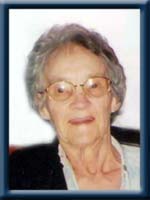 Born in East Clifford, Lunenburg County, she was a daughter of the late Sanford and Nettie (Kaulback) Crouse.

Laura will be fondly remembered as a devoted wife and mother who enjoyed gardening, knitting and reading as well as being involved in various community activities as time permitted.

Cremation has taken place under the direction of Chandlers’ Funeral Home, Liverpool, where a funeral service will be held Monday, June 3rd, 2013 at 2:00 p.m., Reverend Lloyd Gillieo officiating assisted by Reverend Vic Adams. Burial will be in Hillcrest Cemetery, Westfield. Family flowers only, donations may be made to the Canadian Cancer Society or to a charity of your choice. Online condolences may be made to www.chandlersfuneral.com

Offer Condolence for the family of Frail; Laura Jane