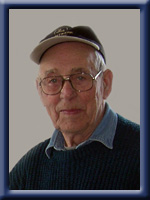 FRAIL – Ilane L., 86, of North Brookfield, Queens County, passed away peacefully in Queens General Hospital, Liverpool on Sunday, September 18th, 2011.
Born in Westfield, Queens County, he was a son of the late Stanley and Grace (Mansfield) Frail.
In his early years, Ilane worked in the woods, the bucket factory, and was a self-employed truck driver. In the 1950’s, he went to work with Department of Transportation as a machine operator and later as a supervisor; retiring after more than 30 years of service. He was a member of the North Brookfield United Baptist Church and an honorary director of the Queens County Fair, where he served a director, past-president and livestock weigher. He was an avid outdoorsman and enjoyed hunting and fishing. His passions in life were his family and friends, spending time at his cabin and working with his “old dozer”. He loved animals of all kinds whether wild or tame.
He is survived and sadly missed by his daughter June Lewis of North Brookfield. Grandsons Kevin (Pam) Lewis of Toledo, OH and Kris (Sheila) of Halifax; great-grandsons Tyler and Ryan of Toledo, OH. Several nieces and nephews.
He was predeceased by his wife Blossom “Bob” Fancy; great-grandsons Jordan and Patrick; sister Iva Lowe; brothers Cecil, Percy and Billy; and son-in-law Wendell Lewis.
Honoring his wishes, cremation has taken place under the direction of Chandlers’ Funeral Home, Liverpool with interment to be held at a later date. A celebration of Ilane’s life will be held Sunday, September 25th from 1 to 4 p.m. at the Westfield Community Hall. No flowers by request. Donations may be made to the North Brookfield United Baptist Church or to any charity. Online condolences may be made to www.chandlersfuneral.com
The family would like to express deepest appreciation and thanks to all the devoted relatives and friends who were so faithful. Thanks also to Dr. Jim Rafferty and Dr. Garry Morash, the V.O.N., Region of Queens Home Support and the nursing staff at Queens General Hospital. Again, heart-felt thanks!

Offer Condolence for the family of Frail; Ilane Lovette