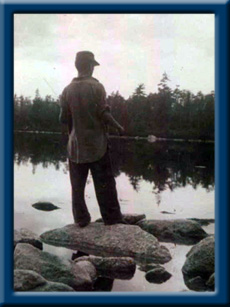 Frail, Calvin Douglas, age 81, of Westfield, Queens County, passed away peacefully on Wednesday, February 24th, 2021, in North Queens Nursing Home, Caledonia.
Born in Westfield, he was a son of the late Donald and Myrna (Smith) Frail.
Calvin was employed in the forestry industry for many years before working as a heavy equipment operator later in his working career. Calvin was a jack of all trades and a master of many. He could often be found out in his shop, working on one of his many projects he had on the go. Calvin loved hunting, trapping and fishing. He and Peggy also enjoyed playing and singing at local weekend music jam session’s in the area back in the good old days. Calvin’s greatest joy in life was his family and he greatly loved his grandchildren who were his life. He had a great dry sense of humor and will be greatly missed by his family and close friends.
He is survived by; sons, Blaine (Melanie) of North Brookfield, Neil (Rhonda) of Westfield, Peter (Jackie Jermey) of Hibernia; daughter in law, Vicki Frail, of Halifax; grandchildren, Ashley Frail, Aaron Frail, Troy (Bobbi-Jo) Westhaver, Paul (Tracey) Westhaver, Courtney (Lee) Larade, Jessica Jeremy (Steven); great grandchildren, Zeke, Owen, Petton, Jayden, Celeste and Addison; sister, Joanne Conrad of Milton; brothers, Byron (Wanda) of Westfield and Weldon of LaHave.
He was predeceased by his loving wife, Peggy; a son, Craig and a brother, Bentley.
Cremation has taken place under the direction of Chandlers’ Funeral Home, Liverpool. A graveside service will be held in Hill Crest Cemetery, Westfield on Friday, July 9, 2021 at 11:00 a.m.. No flowers by request, donations may be made to the Hill Crest Cemetery Fund. Online condolences may be made to the family at www.chandlersfuneral.com

The family would like to send a special thank you to all the staff of North Queens Nursing Home for all their special care.

Offer Condolence for the family of Frail; Calvin Douglas