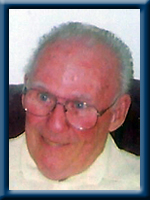 Born in Harmony Mills, Queens County, he was the only son of the late Ashton and
Melissa (Eisan) Frail.

Bernie worked in the machinist trade for over forty years retiring as a Trades Training Supervisor after thirty five years at the Naval Dockyard in Halifax. He had an interest in harness racing and sold, repaired and even made some equipment as a hobby.

He is survived by his sisters Roxie McBride of Caledonia, Queens County, Norma Kennedy of Charlottetown, PEI and several nieces and nephews.

He was predeceased by his wife Iris, his sister Joyce Veinot and infant sister Doris, his nephews Stillman McBride and Douglas McBride.

Funeral arrangements are under the direction of Chandlers’ Funeral Home, Liverpool. Funeral service will be held at the Caledonia United Baptist Church on Saturday, September 27 at 2:00 p.m., with a visitation to be held from 1:00 – 2:00 p.m., prior to the service. Reverend Vic Adams officiating. Interment will be in Harmony Cemetery. Family flowers only. Donations may be made to the Kidney Foundation of Nova Scotia. Online condolences: www.chandlersfuneral.com.

Offer Condolence for the family of Frail; Bernard James