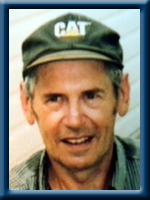 FRAIL – Bentley E., 76, of Westfield, Queens County, passed away peacefully in Queens General Hospital, Liverpool on Friday, February 20, 2015.
Born in Westfield, he was a son of the late Donald and Myrna (Smith) Frail.
Bentley was a small engine repairman for North Queens Electric for many years. He loved to hunt and fish and work in the woods.
He is survived by his sister Joanne (Alfred) Conrad of Milton, brothers Byron (Wanda) and Calvin, both of Westfield, Weldon of LaHave Manor.
He was predeceased by his companion Marlene Mansfield and his sister in law Peggy Frail.
Cremation has taken place under the direction of Chandlers’ Funeral Home, Liverpool, NS. A private family memorial service will be held at a later date. No flowers. Donations may be made to the North Queens Fire Association. Online condolences may be made to www.chandlersfuneral.com

Offer Condolence for the family of Frail; Bentley Eugene