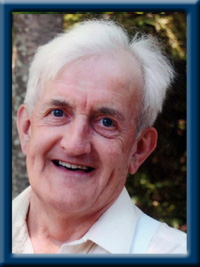 FORD – John Willard, 82, of Kempt, Queens County, passed away on March 15th, 2021 in Queens General Hospital, Liverpool, NS.
Born in Kempt, John was a son of the late Harry and Melissa (Rowter).
In the early days of his career, John worked at a number of jobs before being hired by Parks Canada as the maintenance supervisor at the newly created Kejimkujik National Park in the early 70’s where he worked until his retirement. John was very active in his community and served on the board of directors for the North Queens Nursing Home for 17 years as well as being a member of the NS Woodlot Association. John was a member of many fraternal organizations: Mechanics Lodge #78 AF & AM, Caledonia, Royal Arch Masons; Rossignol Chapter #6, Liverpool, Austin Bentley Council #15, Annapolis Royal, Shriners Philae Temple and 33rd Degree Scottish Rite, Halifax, Eastern Star (charter member) Pearle Chapter #71, Caledonia.
John had many interests mostly centered around his love for the outdoors. He and his brother, Howard spent many hours together over the years tending to their trap lines, tanning the hides and selling them. In later years, they could often be found together out in the garage working on one car or another. John also spent a lot of time with his brother-in-law, Murray travelling to Newfoundland together for a successful moose hunt. John spent a lot of time at the cabin on the Medway River with Murray, along with anyone else they could gather up, hunting, fishing and telling tall tales.
Upon retirement, John set out to build and operate a portable sawmill from scratch, logging and yarding out logs. Over the years, he sawed some beautiful lumber with that mill.
John is survived by his sister Marilyn Rawding, brother Howard (Anna). John was not only an uncle, but also a mentor to his nephew Brent, nieces Faye Heck, Sandra (Stacey) and daughter, Samantha Symonds, Heather and son, Riley Cook. When Rosamond lost her husband, John stepped in and served as a father figure for her two daughters (and his nieces) Jocelyn (Doug) son Patrick and daughter Kimberly Drane and Cheryl (Paul) Raftus. He will be sorely missed.
John was predeceased by his sister Rosamond Telfer.
Arrangements are under the direction of Chandlers’ Funeral Home, Liverpool. A graveside funeral service will be held on Saturday, March 20, 2021 at 1:00 p.m. in Pine Grove Cemetery, Kempt, NS. Family flowers only. Donations may be made to the North Queens Fire Department or a charity of your choice. Online condolences may be made to www.chandlersfuneral.com.

Offer Condolence for the family of Ford, John Willard