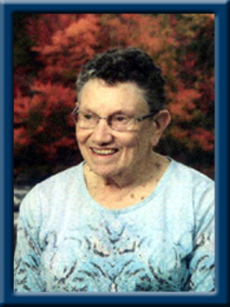 Born in Edmonton, Alberta, she was the daughter of the late Robert and Mary (Smith) Greig.

Barbara’s first job was at Seamone’s Bakery before spending over 25 years at the Liverpool Metropolitan Store where she managed the Ladies Department. During this time she also helped the Metropolitan Corporation set up new stores throughout the maritime provinces. Retiring in 1996, Barbara became an active volunteer in Queens County, collecting for many charities and she even ran the Queens County Food Bank for about 10 years. In 2004 Barbara received the honor of being the South Shore’s Volunteer of the year and in 2005 she received another award for collecting the highest amount of money in a small village and had the honor of having an invitation to see the Lieutenant Governor at Province House in Halifax. When she moved to Charleston from Milton in 2009 she decided the best way to get to know everyone was to do what she enjoyed doing best, volunteering. Barbara’s greatest joy in life was her family and she greatly loved her grandchildren who were her life. She was a beautiful woman who gave endlessly of her time and love.

She was predeceased by her loving husband, Reginald and a brother Charles.

Cremation has taken place under the direction of Chandlers’ Funeral Home, Liverpool. A Private Family Service will be held at a later date. No flowers by request, donations may be made to the Queens County Food Bank or to Queens Universally Designed Playground. To share memories or condolences, please visit www.chandlersfuneral.com

Offer Condolence for the family of Foley; Barbara Annabella