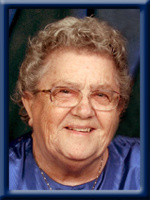 Born in Milton, she was a daughter of the late Hollis and Annie (Keans) Greenough.

Joan was an active member of the Liverpool United Baptist Church and bible study. She was an avid “Coffee League” bowler and enjoyed crocheting, knitting, card parties and, in her early years, bingo. She will be fondly remembered for her “gift of gab” by her family and friends.

She is survived by her sons: Robert “Duff” (Patty) and David (Bonnie), both of Sandy Cove, Queens County and Dale of Valleyview, AB. Five grandchildren and eight great grandchildren.

She was predeceased by her husband Robert and her sister Mabel Briand.

Offer Condolence for the family of Flemming; Joan Muriel