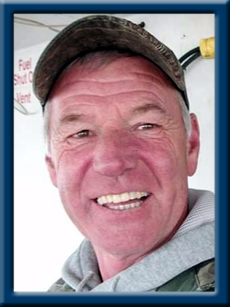 FISHER – Martin Owen, 57, of Southwest Port Mouton, Queens County, passed away peacefully on February 8, 2019 in Queens General Hospital, Liverpool.
Born in Liverpool, Marty was a son of Hazel (Allison) Fisher of Port Mouton and the late Earl Fisher.
Marty will be fondly remembered as a strong and carefree person who had a good sense of humor. He was a hard worker and a good provider. Marty would do anything he could to help anyone especially his family and friends. He was always full of adventure and favored living life on the edge.
Marty was a fisherman his entire life. He loved being on the water. As an outdoor enthusiast, he had a deep passion for hunting. His slice of paradise was Port Mouton Island.
Marty is survived by his daughter Stacey Fisher (Jonathan Whynot) and his granddaughter Tegan Whynot of Liverpool. His wife Shelley and his step granddaughter Marlee both at home. His sister Karen (Lance) Roy of Liverpool, his brothers Edward (Evelyn) of Milton and Donaldson (Felica), Brian (Lenora), Robin (Rosalin) and Earl (Melanie) all of Port Mouton along with many nieces and nephews who adored their Uncle Marty.
Marty was predeceased by his sister Brenda McKinnon.
Cremation has taken place under the direction of Chandlers’ Funeral Home, Liverpool. A celebration of Martin’s life will take place Friday, February 22, 2019 from 6 until 8 p.m. at the West Queens Community Hall. No flowers by request. Donations may be made to the Pancreatic Cancer Canada Foundation. Online condolences may be made to www.chandlersfuneral.com

Offer Condolence for the family of Fisher; Martin Owen