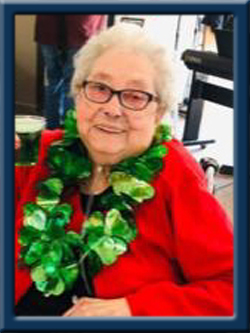 Born in South West Port Mouton, Hazel was a daughter of the late Wilbert and Rita (Roy) Allison.

Along with being a fulltime mother, Hazel also worked many years at the local Port Mouton fish factories. Hazel’s greatest joy in life was her family and greatly loved her grandchildren who were her life. Hazel and Earl’s house was always full of activity back in the day with their children and friends who often hung out in their loving home. She loved to drive even though she obtained her drivers license later in life. Hazel had many hobbies, some of which were bingo, watching Jeopardy on T.V., baking, quilting and knitting. She was a beautiful woman who gave endlessly of her time and love.

Visitation will be held on Wednesday, September 30th, 2020, from 6:00 – 8:00 p.m. and a funeral service will be held on Thursday, October 1st, 2020, at 1:00 p.m., both from Chandlers’ Funeral Home, Liverpool. Reverend Wayne Smith officiating. Burial will be held in South West Port Mouton Cemetery. No flowers by request, donations may be made to the Canadian Cancer Society or to the Port Mouton United Baptist Church. To share memories or condolences, please visit www.chandlersfuneral.com

Offer Condolence for the family of Fisher; Hazel Doreen