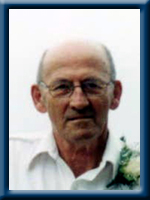 Born in Port Mouton, he was a son of the late Vincent and Flora (Daury) Fisher.

Earl was a self-employed fisherman for most of his working life. He was a former employee with C.W. MacLeod’s Fisheries, Nickerson Bros. and Steel and Engine Products Limited (STENPRO), Liverpool. Although retired from fishing, he stayed active in the fishery with his sons. He was also an active gardener in his spare time.

He was predeceased by his sister Edna Roy.

Visitation will be held Monday, March 3, 2014 from 7 until 9 p.m. in Chandlers’ Funeral Chapel, Liverpool. Funeral service will be in Southwest Port Mouton Community Cemetery on Tuesday, March 4th, 2014 at 2:00 p.m., Reverend Sheila Redden-Smith officiating. Family flowers only, donations may be made to the Southwest Port Mouton Community Cemetery Fund. Online condolences may be made to www.chandlersfuneral.com

Offer Condolence for the family of Fisher; Earl John