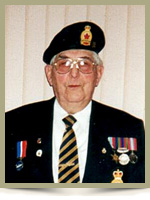 Donald Burgess Fisher – 86, of Liverpool, Queens Co., passed away peacefully on February 9th 2011 with his family by his side.

Donald served in the Merchant Marines throughout the duration of the Second World War, loved the sea and was very proud of his world travels. After the war he moved on to become purchasing clerk for TRA Wholesalers. He was Past Noble Grand – Odd Fellows, Stratachona Lodge, Liverpool,  Life Member of the Royal Canadian Legion, Branch 38, Liverpool and former President of the Queens County Veterans Club.

Donald was a great husband, brother, grandfather, great-grandfather, uncle and friend who loved all people, was an avid visitor of the sick and elderly, a friend to all and stranger to none. He was a consummate family man and gentleman who will be dearly missed by all.

Visitation will be held Friday, February 11th, 2011, from 7-9 p.m., with a Legion Service at 7:00 p.m.,  A Funeral Service will be held Saturday, February 12th, 2011, at 11:00 a.m., followed by a reception, all from Chandlers’ Funeral Home, Liverpool. Reverend Donald Lawton officiating. Burial will be in Trinity Anglican Cemetery, Bog Road, Liverpool. Family flowers only. Donations may be made to Trinity Anglican Church, Queens General Hospital Foundation or to the Canadian Cancer Society. Online condolences may be made at www.chandlersfuneral.com

Offer Condolence for the family of Fisher; Donald Burgess