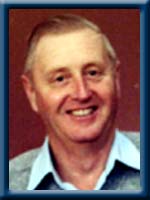 Born in Imperoyal, Halifax Co. and raised in Petite Riviere, Bob lived in Milton, NS for many years. He was the youngest child of Samuel Howard and Annie Louise (Kempton) Ferguson.

As a teenager, Bob left school to open a blacksmith shop in Petite. After the death of his father, Bob was hired by the Nova Scotia Power Corporation where he was employed for 33 years, rising from a labourer to the Head of Hydro Maintenance for the province. Bob was a true “Mr. Fix It” repairing many appliances, vehicles and many other items over the years; always on a budget.  He built many things over the years: a travel trailer, a cabin, furniture, and more.  Bob was a long time member of Milton Christian Church, Disciples of Christ and also a school trustee. For many years, he and his wife, Mildred square danced, forming many strong friendships across Nova Scotia, Europe and the US. They loved to go for “spur of the moment” drives where they would stop along the way at their favourite restaurants or to visit friends.

Cremation has taken place under the direction of Chandler’s Funeral Home, Liverpool. A memorial service will be held Saturday, March 23, at 2.00PM at Milton Christian Church, Disciples of Christ. Reverends Joe and Pat Roberts officiating.  Reception to follow.  Burial will be at a later date. Family flowers only, donations may be made to Milton Christian Church, Disciples of Christ. The family would like to thank the compassionate caregivers at Hillside Pines particularly Amanda and Kim. Online condolences may be made to www.chandlersfuneral.com

Offer Condolence for the family of Ferguson; Robert Gerald