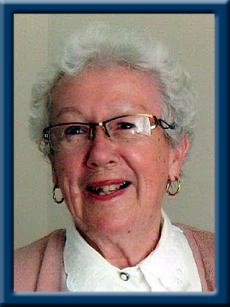 Ferguson, Marie Celeste, 85, of Liverpool, passed away peacefully on Tuesday, March 14th, 2017, in Queens Manor, Liverpool.
Born in Yarmouth, she was a daughter of the late Luxime and Evangeline (d’Entremont) d’Eon.
Marie graduated with a degree in music and taught for many years in the Liverpool Schools. She was active in the music community, participating in the music festival and the Kiwanis Christmas Concerts. She was a member and organist for St. Gregory’s Catholic Church for over 50 years and was a member of I.O.D.E.
She is survived by her loving husband, Charles; step-sons, Peter (Susan) Ferguson, of London, Ontario, Michael (Heather) Ferguson, of Milton; step-grandchildren, Ryan and Lindsay; brother, Ed (Gayle) d’Eon, of Yarmouth.
She was predeceased by her first husband, Francis Mouzar; her sisters Jacqueline Degrace and Corine Shephard and her brother Bernard.
Cremation has taken place under the direction of Chandlers’ Funeral Home, Liverpool where visitation will be held Thursday, March 16th from 7 until 9 p.m. Funeral mass will be held on Friday, March 17th, 2017, at 11:00 a.m., from St. Gregory’s Catholic Church, Liverpool. Father Charles Offor officiating. Burial will be in St. Gregory’s Catholic Cemetery, College Street, Liverpool at a later date. Family flowers only; donations may be made to St. Gregory’s Catholic Church. To share memories or condolences, please visit www.chandlersfuneral.com

Offer Condolence for the family of Ferguson; Marie Celeste